The single most startling — and bravest — debut role any actor ever took on was Ned Beatty’s in the 1972 film Deliverance. 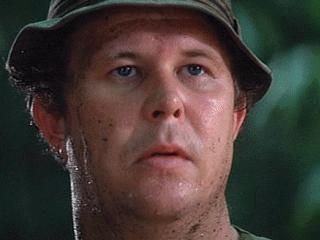 From the start, Bobby Trippe is not an especially likable character; he’s sort of an obnoxious sad sack (which is why he annoys Lewis, Burt Reynolds’ virile outdoorsman character, to no end).

Then, of course, there’s the terrible turn the story takes for Bobby.

Bobby and his friends, Atlanta businessmen on a canoe trip, run afoul of a pair of backwoods Georgia mountain men. One of those mountain men brutally rapes Bobby, while exhorting him to “squeal like a pig” (Bobby being a chubby guy). 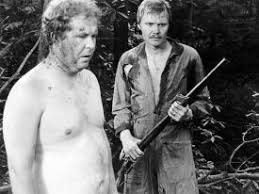 The scene was graphic and disturbing, especially for its time, with Beatty stripped down to his jockey shorts, covered in mud and leaves, crawling through the dirt, and squealing while being manhandled by his rapist (played by Bill McKinney, in another thankless role).

The guts it took for an actor — especially an actor so thoroughly average-looking as Beatty, meaning he couldn’t rely on looks to help propel his career — to make his first impression in film in such a role blows my mind. Cojones the size of basketballs, y’all.

Again, the era needs to be considered, too; Bobby’s rape is played as an embarrassment, not a trauma; his primary concern afterward is simply that no one finds out, lest he is seen as less of a man. The scene in which he asks his friends to keep it a secret is actually played for laughs.

So the first impression film viewers would get of Ned Beatty was of a chubby, ordinary-looking guy in his mid-30s being raped and humiliated, then afterward just being embarrassed about it.

That Beatty went on to have the very impressive career he did speaks volumes for his talent. 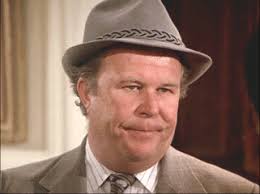 However, the network. Stocky, genial-looking supporting actor Ned Beatty was hailed in earlier time by Daily Variety as the “busiest actor in Hollywood.